Celebrate Vincent and Augie's friendship with these paired enamel pins! Inspired by Joey B's poem The Astronaut’s Whale, this pin set serves as a reminder that while chasing your dreams is important, home is where the heart is.
Product Details: 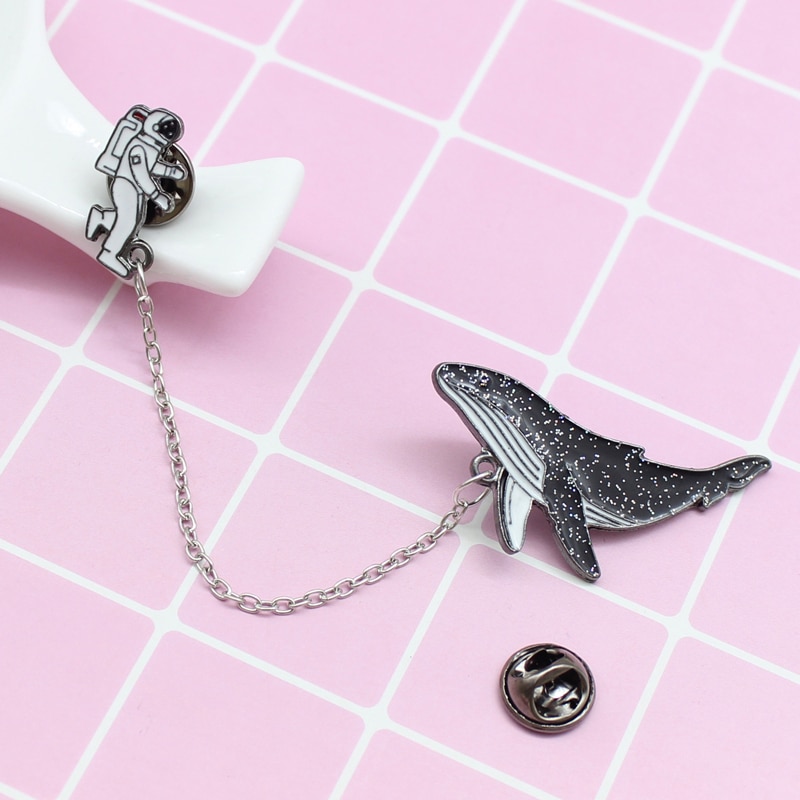 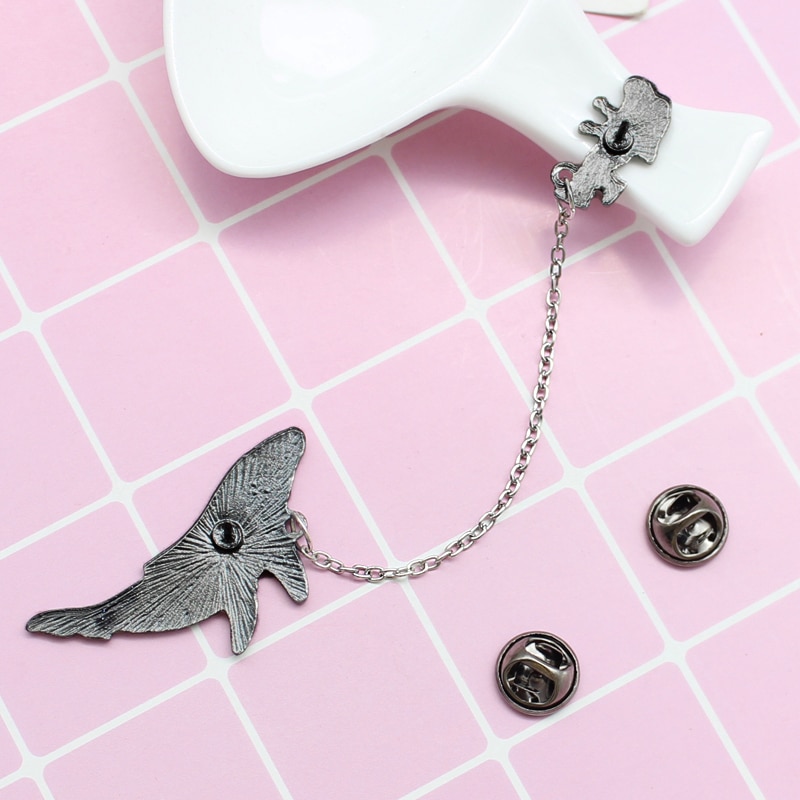 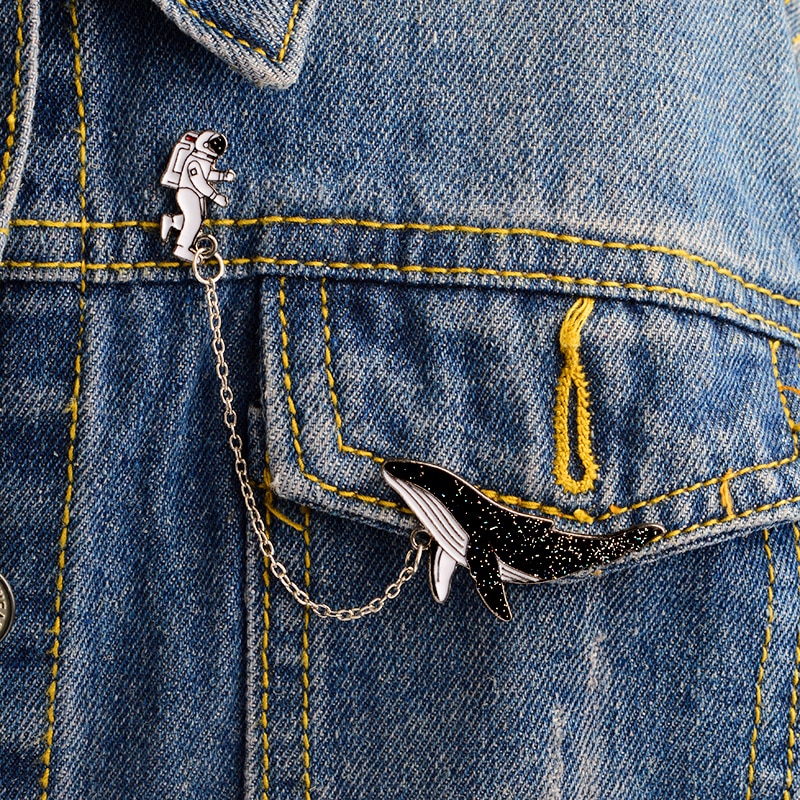 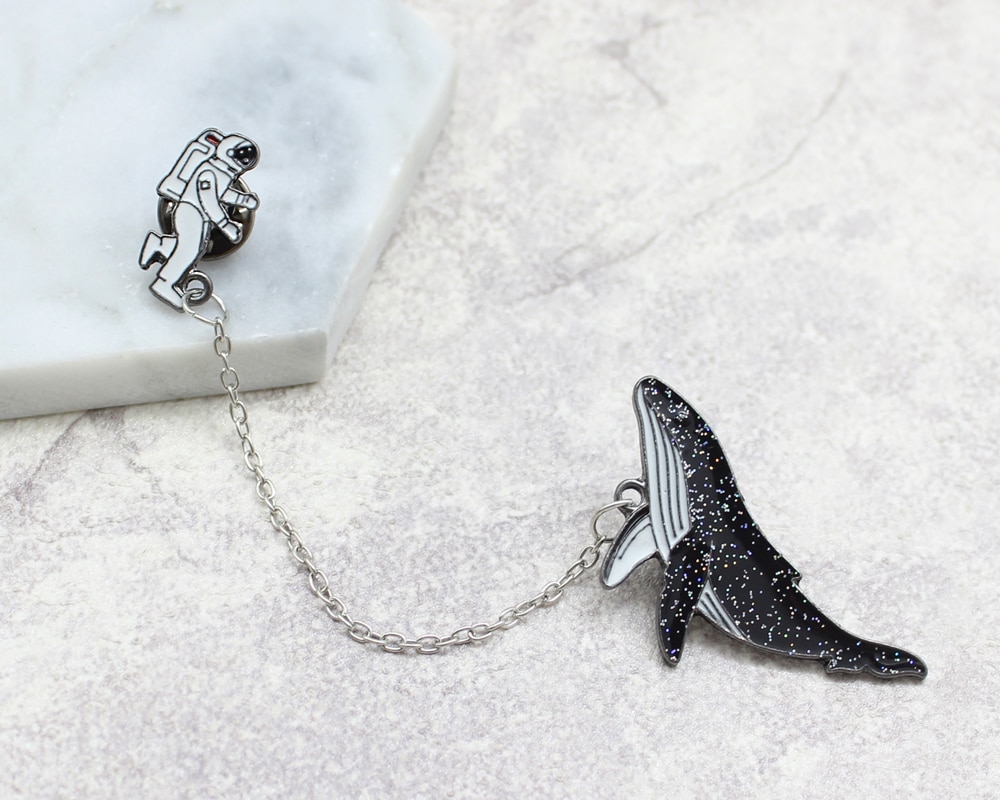 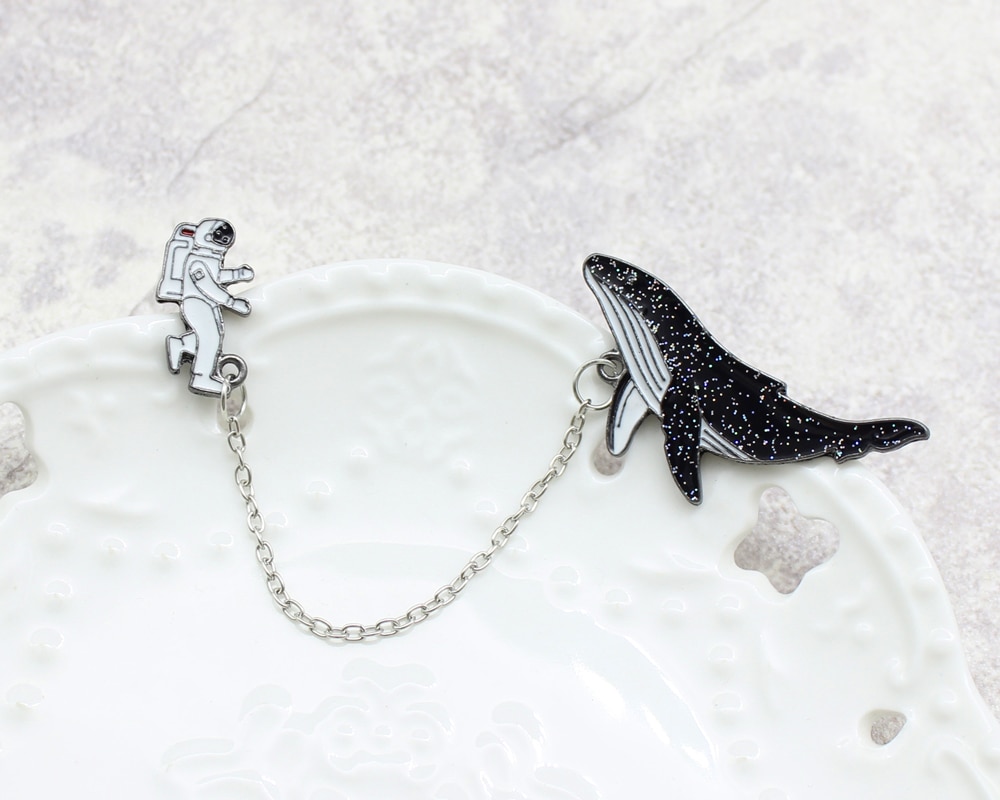 The Astronaut’s Whale
by Joey B.

Vincent the whale lived with his family at sea
With his mother, his father, and his pet sea star named Lee
And life underwater was as easy as it came
Everyone lived happily not a reason to complain
But Vincent was different; he didn’t seem to agree
This submarine lifestyle was too boring and plain
On top of it all while his friends would have fun
Vincent would dream of life under the sun
And this wandering mind would cause others to stare
‘Cause they thought he was crazy and too far out there
He was bullied by the swordfish and ignored by the goldfish
Harassed by the jellyfish and needled by the blowfish
He was often left out from his tail to his spout
Even laughed at and splashed at and whispered about

Until one day a creature who he’d never seen
Got caught in his mouth, in the strings of baleen
The creature it seemed was a man in a suit
With fluffy white pants, a glass helmet, and boots
The man, through the glass, said, “Help me I’m caught!
I’m not your fish food; I’m a lost astronaut!”
So Vincent replied, “Oh, I couldn’t harm a fly!
I’m as gentle as June, I’m as peaceful as pie”
But the astronaut, in fear, turned and wiggled and tossed
He was floss for a whale and so terribly lost
But just then out of the blue floated a piece of driftwood
And the man in the suit did what any man would
He pulled and he screamed to escape from the mouth
Of Vincent the whale, who was as mean as a mouse

But as he broke loose to swim away and hide
The man saw the sadness from poor Vincent’s eyes
So he stopped and he turned to ask, “Why are you down?
You live in the most beautiful of all places around!”
But Vincent just shrugged and said, “You wouldn’t understand,
I just need a hole to stick my head in the sand.”
Well the astronaut paused and thought of what he could do
To make Vincent feel better and turn his grey sky to blue

“First things first,” said the man in the suit
“What is your name and how do you do?”
Vincent replied and politely gave him his name
And said he liked stars and planets and planes
The astronaut smiled, and said, “Well, my name is Augie
And I would shake your hand but my gloves are so soggy”
Then Vincent replied, “Well, I’d shake but I can’t
’Cause you see I’m whale, I have fins and not hands!”
Augie said, “Fine, we can skip that part,
And go back to talking about the planets and stars
‘Cause wouldn’t you believe, I like the same sort of thing?
I like the sun and the moon and everything in between!”

Right off the bat, as if written in stone
Vincent and Augie were friends to the bone
They talked about space and the moon and the sun
And the comets and planets and far away fun
Then Vincent sat silent and sad so it seemed
He thought none of this was real; it was only a dream
“I’m stuck down here with this lousy seaweed
With the lobsters and crabs and not a single green tree”
So Augie said, “Vincent! Let’s get out of this place!
You can come along with me, we’ll hang out in space!”

“But how would we get there, you know I can’t fly?”
“My rocket of course, it’s our horse of the sky!
It’ll take us all over to any place we want to go
To Jupiter or Mars or as far as Pluto
We can spacewalk and moonwalk and tumble and twirl
We can drift through the waves of the Milky Way’s swirl!”
Just then Vincent smiled and said, “Please, say no more!
Just show me the way to your space shuttle’s door!
And there’s one other problem, say how will I fit?”
Augie said, “Simple, I’ll tow you on this trip
Then once we’re in space, there everyone floats”
Like here on the water, big ships and small boats”

So one day while surfing the stars in the sky
Vincent asked Augie if he knew the reason why
And Augie thought...

“Homesickness!” said Augie; he knew it for sure
And he told his friend Vincent of the very best cure
Though this fun out in space could go on forever and ever
Life and family at home is a one time only endeavor
And after listening and remembering the deep ocean blue
Vincent soon realized something he needed to do
He had to return to his life under the sea
To the ones who he loved like his pet sea star named Lee
‘Cause life out in space wasn’t made for a whale
He was built for the sea with his fins, spout, and tail

So Vincent and Augie shuttled out of the black
They left without warning, without looking back
And when they returned to the ocean so blue
Vincent discovered what was honest and true
And he blew and he blew through his blowhole up top
His happiness grew and his love would not stop
He kissed his poor mother who was sad since he’d left
She hadn’t stopped crying each day she had wept
And his father was glad that his son was okay
He worried and worried while Vincent was away
And Vincent remembered everything he loved
He belonged here he knew it, he fit like a glove
This is where I truly belong
This is where I truly belong

And while watching young Vincent discover his fate
Augie was thinking of how he too couldn’t wait
To get back to his home and his beautiful wife
To breathe the wild air and live a land mammal’s life
So quickly he said his goodbyes and farewells
And Vincent helped Augie find a boat with big sails
It won’t be long till we both meet again
For this new friendship of ours is far from its end
And now that we know where we each belong
We will visit and share and sing faraway songs
And remember our times exploring deep outer space
And know that home is the most wonderful place
Where love never wanders or suddenly strays
Forever it’s with you, it won’t go away

Check out the author's website for more Songs, Stories, and Poems!